Man, if that title doesn’t get you, nothing will!

Anyways, on our quest for learning 3D design for terrain, we’ve stumbled on that most ubiquitous (and smelly!) piece of urban scenery. Often hidden in alleys and other out-of-the-way locations, they are none-the-less prominent features of the urban (and suburban) landscape. Before I started researching dumpsters (there’s some fascinating browser history for you!)  I never realized how truly varied the different types of dumpsters were.

From standard bins, to slant bins, to large roll-off style dumpsters for construction clean-up, you have a lot of choices to fit your table. And like all of the terrain we’ve done so far, these should be easy to print with even entry level FDM printers!

In America, it seems dumpsters are all classified by cubic yard size (a yard is 85.6mm shorter than a meter, for the rest of the world), with two, three, four, six and eight cubic yards the most common sizes for your ‘typical’ dumpster.

Anyways, when I think of a dumpster, I guess the four-yard bin is probably what most comes to mind.

Anyways, doing some math, we get these dimensions for the different popular scales:

During the searching, I’ve not seen any dimension for the fork pockets, but based on memory I’d say they’re easy 10″ (250mm) tall and run the entire Y axis of the dumpster. The pockets X axis in probably 6″ (150mm) wide.

Although those numbers are exact values for the scales based on the Waste Management dimensions from the poster above, it’s always good to keep in mind what feels or looks right. When shrunk down, sometimes features can appear exaggerated or misshapen, so always remember after you’ve done everything take a critical eye to it, and adjust as necessary to the item feels right. This is wargaming terrain, and by definition means, it’ll be used. So it’s doubtful anyone is going to care if the dumpster is a bit too big (or small!) as long as it looks like a dumpster and feels right on the board. I break out the dimensions as a starting point and go from there!

For the larger scales, I’m going to leave the dumpster open but model some tops as well. By no means will you have to do so, but they’re fairly easy to do, so it’s not much effort. For the smaller scales, say 10mm and 6mm, I’ll just model the object solid. Plus with the top open, you can model some garbage bags to throw in there (The Terrain Tutor did a great video on how to make full garbage bags). Conversely, you can use some plastic card or even cardboard to build the flaps.

It’s all in the Details!

So, dumpsters are made as easily and cheaply as possible, welded sheet steel and such, but we do have a couple of options for detailing them. First is the raised lip just below the opening. Now I’ll admit that it’s a bit of a pain to do in TinkerCAD, but it’s not too bad.

The other detail is some dumpster seem to have a couple of recessed lines in their front, as opposed to a flat panel. From a hobby perspective, these recessed lines provide some visual interest to the dumpster and give you something to add some details too—a thick wash in the recesses compounded with some water and rust streaks, etc.

That being said, it is a dumpster, so the whole thing is kind of an excuse for exaggerated weathering. To place these recesses in TinkerCAD just take a cube, make a mm or two high in the Z axis, a mm or two in the Y axis and the length of the dumpster X axis and place appropriately.

If you choose to leave the front panel flat, you get a beautiful canvas for graffiti, so it totally depends on what you’re looking to get out of the model. I figure most people will just want something basic to throw some paint and weathering on and to put on the table. I just aim to provide options!

And here’s a quick render of the first prototype! 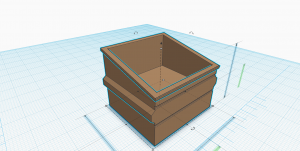 With Mrs. Mack the Maker’s birthday and the 4th of July in the next couple of days, the accompanying video maybe a bit later than normal.

Why you wait, check out all these cool pictures of dumpsters I took! 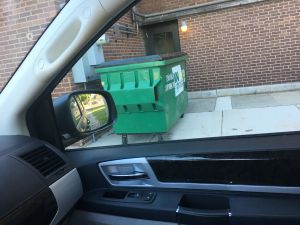 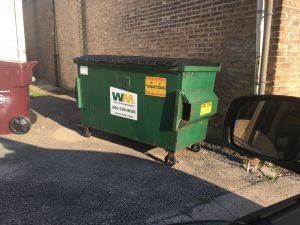 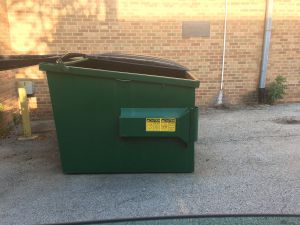