The Road to Adepticon: Part Duex

So, it’s now early October and where am I with regards to BattleTech at Adepticon?

Well, in September, I met with most of the Chicagoland BattleTech Demo Team Agents to hash everything out. We, uh, may have expanded our goals for the convention.

Our original plan was to do one new, custom terrain board for the drop port battle as laid out in the BattleTech novel “Endgame“. We’re still doing that, but we’ve now added two new terrain tables to go with it. The second table will be for the “Throw Back Game” featuring the Death Commando (Comstar in disguise) raid on the New Avalon Institute of Science in 3029.  Finally, I’ll be building New Avalon’s ‘Portsmouth’, the site of a diversionary raid also outlined in “End Game”.

The impetus of all this was my desire to 3D print a mech scale dropship. In the BattleTech universe, interstellar ships (called jumpships) can’t enter a star systems gravity well and require large, intra-system vessels called dropships to move material planetside.  The tabletop game of Battletech in nominally 1/285 scale, or 6mm-ish (1mm=1 foot). However, most dropships that have been released for BattleTech are what’s called map scale (relating to the size of the hexes that BattleTech is played with) and that’s around 1/900 scale. The reason for that is that dropships are huge. The Union class dropship (fairly small as these things go) is around 11 inches in diameter at mech scale. I found a file on Thingiverse that was the correct shape but was map scale and pretty badly faceted. So I had to increase the files size by upwards of 300% as well vastly increase the poly count.

Well, yesterday, I finally finished the work. It was something I would chip at when I had a few minutes here and there. 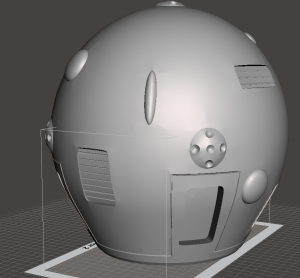 It’s not perfect but I didn’t expect it to be, and what flaws it has will be pretty easily taken care of with some sandpaper and filler. The final measurements end up 283mm in diameter (11″) by 271mm tall (10.6″).

I’ve also designed a *small* container ship (conventional ocean-going ship, here) to be the centerpiece of the harbor at Portsmouth. Container ships are HUGE, so I’m patterning mine off what’s called a ‘feeder’ and it’s currently the smallest type of container ship plying the seaways. Even at 1/285th scale, they are massive miniatures. 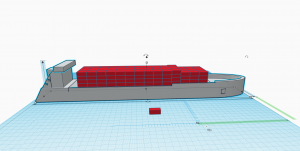 I have wayyyyy more to do, but this is a start!